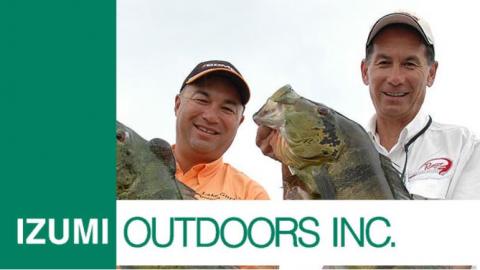 Almost 30 years ago, Bob and Wayne Izumi, the owners of IZUMI OUTDOORS INC., had a vision of providing anglers with information about the sport they love, in an educational and entertaining way. Whether it’s through their Television division, Magazine department, Real Fishing Radio or realfishing.com, Bob and Wayne’s goal remains the same – to entertain and educate anglers by providing the latest and best fishing information available anywhere.

Bob Izumi is Canada’s most popular fishing personality and one of the foremost spokespersons on the sport. For nearly 30-years his weekly Real Fishing Show has educated and entertained legions of anglers, both young and old, on the finer points of fishing. Bob’s infectious enthusiasm and approachable demeanour have made him a “TV-buddy” to millions of Canadians and, as anyone who has ever met him will agree, he’s exactly the same down-to earth guy in person.

Bob’s unmatched credibility in the fishing world is due in part to his incredible success as a tournament angler. In 1979 Bob Izumi became Canada’s first full-time professional fisherman and in over three decades of competitive fishing Bob has won more than 70 major events, far surpassing any other Canadian angler. He has won multiple Angler of the Year and Team of the Year titles and he is the only Canadian angler to win the Triple Crown of fishing; capturing the Canadian Open, the Classic Championship, and Angler of the Year title in a single season. In July, 2011, Bob won his first major championship in the USA when he captured first place in the Everstart Series 1000 Islands tournament.

Along with his television show and tournament career, Bob is an award winning author, seminar speaker, conservationist, and radio show host. His Real Fishing television show and Real Fishing Radio program are Canada’s longest running syndicated series in the television and radio categories. Bob’s fishing seminars regularly sell out and his Real Fishing magazine and web site attract consistently huge audiences. His expertly polished presentation skills coupled with a deep passion for fishing have kept him in demand for over three decades.

All accomplishments aside, what separates Bob from his contemporaries are his amiable manner and genuine love of fishing, qualities that put him in a league of his own.