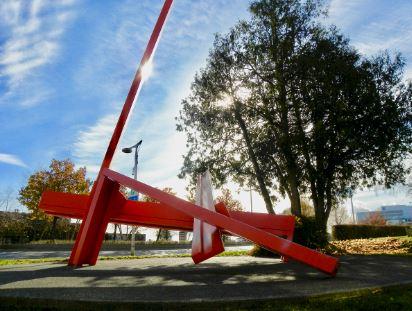 Artist Haydn Llewellyn Davies is best remembered in Burlington for his orange aluminum sculpture Rebecca, a fixture on Lakeshore Road since 1978. The former advertising executive changed careers late in life and became a highly-regarded sculptor. His large sculpture A Space Composition for Rebecca has stood on the south side of the Art Gallery of Burlington since its opening. The artwork explores the interplay between mass and void in defining space. A trip to Stonehenge and several visits to Japan influenced Davies conception for Rebecca. Davies was born in Wales and was inspired by the country’s tradition and landscape. His works are displayed in public and private collections across North America and Europe. In 2003, an exhibit of Davies’ maquettes (small preliminary studies for his sculptures) was held at the Art Gallery of Burlington.

Artistic Category: Private
Business Type: Not for Profit
Request ownership of this listing