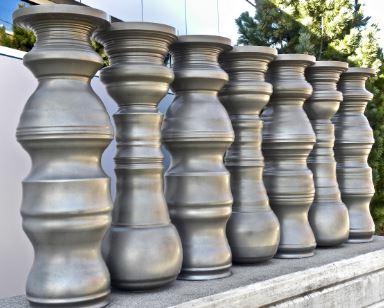 Purchased through the fundraising efforts of the Burlington Art Centre Collection Committee and with the support of the Canada Council of the Arts Acquisition Assistance Program, the Elizabeth L. Gordon Art Program of the Walter and Duncan Gordon Foundation, the City of Burlington and Karp Namisniak Yamamoto Architects Inc.

Alumina was commissioned by the Art Gallery of Burlington in 2008. Payce explores the relationships between form and imagery and the connections of objects and ideas in his artwork. Alumina was inspired by late eighteenth century French Sevres vases and Renaissance Mediterranean apothecary jars (albarelli). The artwork showcases the negative spaces between pottery forms as apertures or images. The viewer’s gaze shifts back and forth between the positive and negative space and invites them to determine possible relationships between the vessels and the images formed between them. This juxtaposition between image and object creates an illusion of movement and references time-based artforms such as animation and music.

Artistic Category: Private
Business Type: Not for Profit
Request ownership of this listing