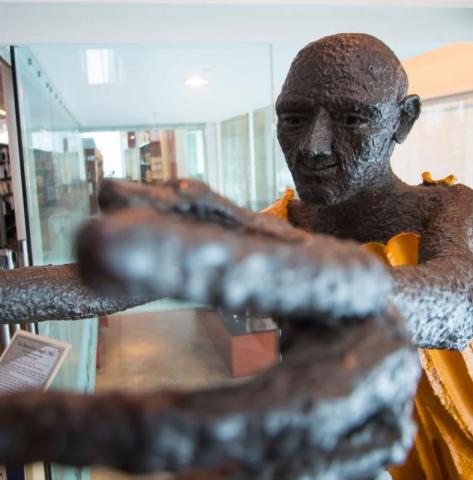 Benevolent Angel is a significant work by George Wallace (1920 - 2009). Wallace was born in Ireland and came to Canada in 1957. He was accomplished in several media: painting, printmaking, drawing and sculpture. Wallace was also an influential art teacher at McMaster University (1960 - 1985) and helped develop the University’s art collection. His work has been exhibited nationally and internationally.

Wallace’s art explores both the spirituality and fragility of the human condition. His figures are often represented in poses that refute gravity. Benevolent Angel almost appears to float, the figure’s face is hauntingly kind, the outstretched arms welcoming, and the flowing robes transcend the sculpture’s material and weight. Located on the second floor of Burlington Central Library, Benevolent Angel was given in memory of Jane Irwin: enquiring scholar, diligent archivist and engaged citizen of Burlington.

Artistic Category: City of Burlington
Business Type: Not for Profit
Request ownership of this listing