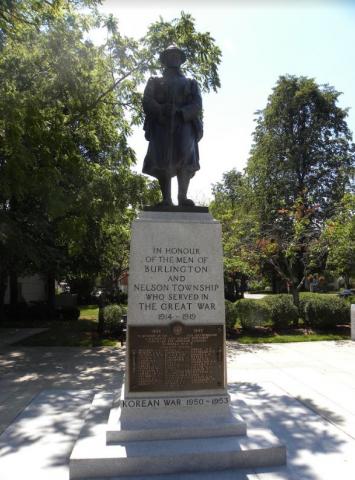 Governor General Lord Byng dedicated this cenotaph in April 1922. Originally located at the west end of Lakeside Park, later renamed to honour Spencer Smith, the monument was moved to City Hall in 1962. The cenotaph is a 10-foot granite column on a two-tier base. A seven-foot bronze statue of a Canadian soldier in First World War battle-dress tops the column, which lists the names of 38 First World War fatalities from Burlington and Nelson Township, 17 key First World War Canadian battle locations, and the names of 44 local service people who died in the Second World War. Burlington’s contributions to the military conflicts in Korea and Afghanistan, as well as peacekeepers, are recognized on the base of the monument.

A verse from the poem Pro Patria by Owen Seaman is engraved under the Second World War plaque:

To teach that he who saves himself is lost;
To bear in silence though our hearts may bleed;
To spend ourselves, and never count the cost,
For others’ greater need; --