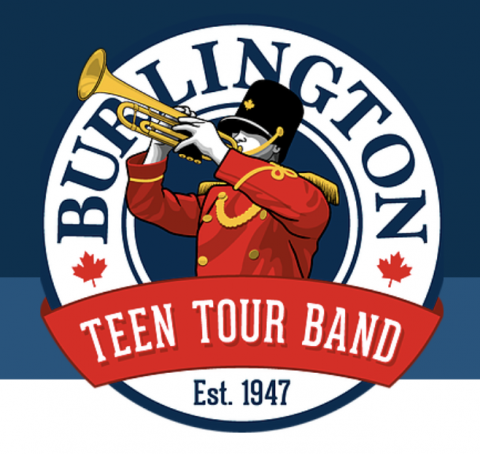 History of the Burlington Teen Tour Band: The tradition of excellence began on December 15, 1947, when 75 nervous members of the Burlington Boys and Girls Band gave their first performance under the leadership of Elgin Corlett, the band's founder and first music director.  The band's first appearance outside Ontario, Canada took place in the summer of 1949, when the Burlington band traveled to Warren, Ohio to perform at a football game and play a concert.

By 1952, the membership had climbed to more than 150 boys and girls.  In 1965, the name changed to the Burlington Teen Tour Band. Management developed a philosophy that would focus on producing a better band that would keep the members active year-round and organize annual tours. Since its humble beginnings in 1947, the Burlington Teen Tour Band has grown into Canada's oldest and largest youth marching band. They have had the honour and privilege to represent Burlington, Ontario and Canada around the world in such countries as: England, Republic of Ireland, France, Japan, The Netherlands, Belgium and Germany.

In addition, the band has performed for Heads of State and Royalty as well as Televison and Movies and at prestigious events such as: the Rosebowl Parade, The 50th & 60th Anniversary of D-Day, the Orange Bowl Parade, and the 70th Anniversary of Pearl Harbour to just name a few. 2017, will marked the band's 70th year of representing Burlington around the world!

When the band competes everyone is a winner! The Burlington Teen Tour Band regularly returns home to Burlington as champions or first prize winner’s from internationally scaled competitions -- but the real reason for competing is not to win awards, but to encourage members to reach for higher levels of personal achievements.

The philosophy supporting the entire music program is a simple one: each member of the Burlington Teen Tour band is strongly encouraged to give his or her best effort along with appreciating and supporting the efforts of all others engaged in activities with the band.

This philosophy emphasizes the importance to the individual of cooperation, discipline, sportsmanship, friendship and an eagerness to learn.  Each person has a double benefit when participating in any competition or contest:  the joy of playing and the satisfaction of supporting others as they put forth their best effort.   Each contest is a learning experience for every single member -- far more valuable to the individual, and the entire band, than the results of any competition.

When the Band competes, it is not to win more trophies or awards,  it is to support and encourage the efforts of the young men and women who will pass on information and lessons learned in the band as they march onward through their adult lives.