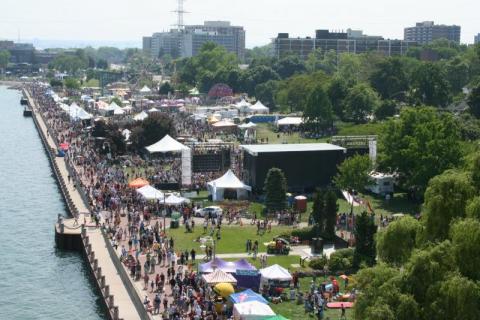 Located on the shore of Lake Ontario, Spencer Smith Park is home to the Sound of Music Festival as well as Canada's Largest Ribfest. The park houses Spencer's, a restaurant with a capacity of more than two hundred diners, that offers beautiful views of Lake Ontario and Lakeshore Road. The park boasts: Discovery Landing Waterfront Centre and Centennial Pond which features ice skating in the winter months, and is used as a model sailboat pond in the summer. The Dofasco Waterjet plaza offers both a water play area for children and a playground.

In recent years, Spencer Smith Park has been redeveloped with community input by the Waterfront Team to become the recreational centre of the Waterfront Trail. The wide promenade allows a magnificent view of the lake, beach and Skyway Bridge while sitting on the breakwall, walking, cycling or rollerblading. The park features several performance areas, historic monuments, a children's playground, Japanese gardens and expansive lawns for leisure activities.

The land for Spencer Smith park was originally part of a parcel granted to the Mohawk leader Joseph Brant, in recognition of his service to the British Crown during the American Revolution.